BRIGHTON MARINA FISHING for the East and West breakwaters 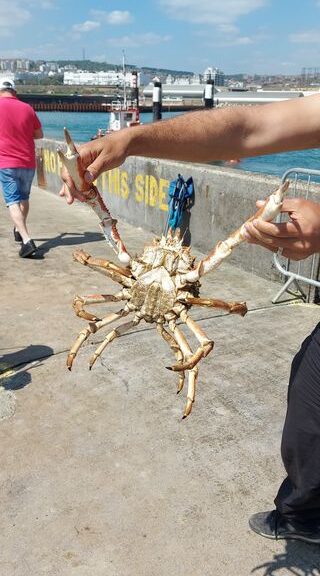 Morning world, lovely and sunny already today at 6am !. but less of that n more of an update, Fri Ive had very little info other that the night fishing is reasonably decent and every night this week including last night has produced some decent bass, best bait .. mackerel which still remain fairly elusive, yesterday i spect the whole day from 8am fishing the west and all i can say was… it was very hard going. I managed 3 bream on the low which is tbh not that common IMO, and a few other did the same. As the tide came up so the fish vanished to be replaced by crabs that seemed to get larger and larger to the degree that 2 lads managed to get a whopper up to the edge of the caisson before the line gave out and it dropped back in. I kid u not, it was the largest this year and the body was larger than a dinner plate. We have had one weighed and pictured at 5lb and this was bigger possibly pushing over 6lb. In the end i matched crab and bream numbers of 4 others on the extension had maybe another dozen, with 2 lads finding 5 mackerel. I pulled my lines in about 5.30, I cleared the ext , did a bit of chatting and reports from the main west wall were grim & the best of it were a couple of plaice @ bay 18, but things were very scrappy & plagued by spiders snagging or cutting peoples lines. A lovely day in the sun but tough going. Over on the east , small bream & wrasse on the lower bays , mostly just sized or under for the plaice dotted all up the sandy section ,. My lad and friend had a few small plaice n JNR managed a decent wrasse that gave him a run on his light 6foot spin rod which he enjoyed.
Seems a few had to be reminded about keeping under sized fish on the east.. well done to those angers that had a chat and pointed out why they should go back.

Im please to say that some are getting the message out to other anglers re sizing fish and having a chat or as I would say .. “they are getting involved” Its good , it benefits the wall and stets a better standard on the walls, getting involved means a polite chat , not scream its others 🙂 so a big well done them from all of us anglers that want better, its encouraging to see.
Times up for me as im running about on the west today .
tight lines all and enjoy the day.
F