round up of sorts 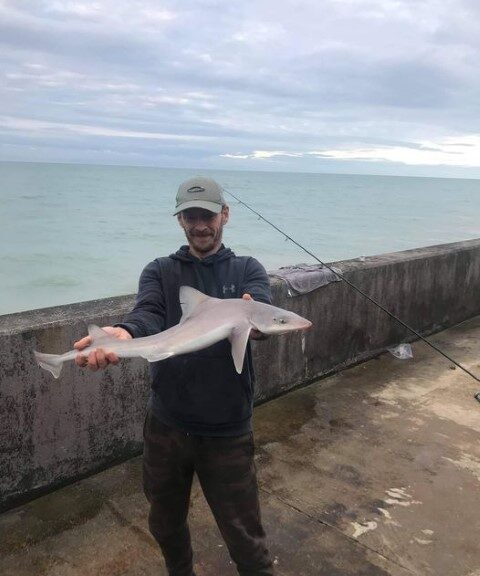 Lack of updates, part due to holidays, part because wall been fairly quiet & occasionally my private life gets in the way of posts :).
As say things have been fairly quiet of late especially for this time of year when people would expect the walls to be teaming with catches. It has been a bit sluggish but there does seem to be an upping of the number of hounds caught on the east this year, not sure if thats good or bad just thats how it seems. Bream numbers seem well down on the last few years as do wrasse numbers. Bass fishing possibly the best in a few years or maybe there is a raise in the standard of anglers targeting species, so what is happening ? global warming ? climate changes ? maybe just a simple case of a down year. Watching tv other day it said about how bad the weather had been in London 100 years back that it was snowing in July on that given year so maybe global warming is nature playing games .. hey I dunno I just look at fish patterns on the marina over the last 15+ years.
Anyhoo, enough of that , whats happening down on the walls …
So bass, check, still ticking over with some lumps not quite making double sizes, Bream, both walls usual bays for those that know ( a few hints on the site wall guides) Wrasse, numbers well down but those being caught are good sizes, Plaice , east arm tick over , many now somewhat lean & while “in size keepers” in my view better going back to fatten up. Gar .. massive lack for this time of year but may run later with the mackie shoals (read on) Sole, dirty water day catches or night time, reasonable sizes but no lumps that can pop up often(in past years) Eels, come in bursts often after a blow and a few are jumping onto baits this week. other species popping up like gurnards & red mullet(goat fish) but IMO again down in numbers, rays seem to have slowed up but undies are a common visitor to the east. Who is waiting for me to mention mackies again 🙂 ?
Night fishing has slowed this week but over all the last month has been better than those sitting in the sun and baking to crisps. Horse mackerel had a big flurry beginning of july but not as prominent as past numbers. If you are targeting these with lights down the wall please check your colours , please no green or red lighting on the walls. for the night catches, steady numbers now of bream, bass, sole, eels, rays, plaice often in close.
so them mackies, very few large shoals so far & generally best time is 1st & last light at the moment … why are they late this year ? is this normal ? is there a pattern ? IMO and its only an opinion i have a theory based on ICES reports over the last 5 years.
The report… i dont have a link but sure some can dig for it, states that the mackies are moving further and further north to breed as sea temps raise. This the fry is under the ice & as it travels to find food it has further to travel each year than the previous.. so what does that mean you ask… well IMO it means that the arrival on the south coast take longer & later each year & this pattern has been occurring over the last 8 years at least.
AAAhhhh but u say , we have shoals of mackies late April… yes says I BUT, look at them, they have big fat stripes on them in 3 or 4 large bands across the body, IMO again these come up from the Bay of Biscay & are linked to the Spanish mackerel shoals thus the April run still happens but the July run is now later in the year …..dot dot dot…:) sooooooo this results in 2 distinct types of mackerel in the channel in April(ish) and then the “summer” shoals having further to travel start arriving in August-September. These shoals imo(again) then link up with Garfish from the Atlantic waters and head south while trying to avoid factory ships & pair trawlers hunting bass & bream. oddly the ICES reports state good to high numbers of mackerel fry in tested areas , so in theory the numbers should be higher than what we see on the south coast & I recon thats where the over fishing comes in… One eco group is claiming that mackerel are on the edge of becoming a protected species… I gather on the Iberian peninsula recreational anglers are not allowed to target mackies & they are exclusive domain of the commercial fleets ! go figure.
So finally to the mackies on the marina …. as you may by now gather , numbers are poor, quick 30 min flurries are common dawn and dusk and often over high tides. Likewise similar at night with horse mackerel(scad) numbers are erratic. Will things improve ? dunno but i’m gonna say yes & say look to the bigger tides in August for them to start arriving when there will be tons of reports of tiny joeys being caught n kept ! The next 6m tides start around the weekend of the 8th so im sort of expecting a pick up of numbers by the following weekend (15th) bear in mind this is just my view & Im not known for predicting when fish will arrive, but, this year so far has been odd , even weird, wardens have been saying it all seems 5-6 weeks behind & that seemed the case , now im not so sure Im thinking its nature playing with us…
April squid run, never happened, bream nests smashed off the marina by bad weather disrupted that stock, wrasse numbers hugely down, even plaice numbers seem 30% worse this year. on the up side , more bass, rays & hounds being taken & tons of dolphin sightings all along the Sussex coast. This years patterns seem very different.

I received an email this week asking for the updates, yes I will admit they have been less frequent this year & the buck stops with me, so today I decided to take you on a long ramble as Ive been tardy in my posting.

One final note, or request of anglers using the marina. We have pipe bins sited on both walls for unwanted fishing line, its collected and recycled to make furniture that often is angling related. They were recently vandalised on the west, my “final point” is to ask for
“eyes & ears“.. help us to maintain the facilities on the marina. If you see something off, let a warden know failing that , a message on facebook via the marina group (if u use FB). Vandalism and abuse in general of the marina walls will have fingers pointed at anglers.

Not all vandalism is by slobs but any extra eyes in the marina help us reduce issues such as this and other issues such as bad behaviour, open fires(bbq’s etc)drunks, ppl urinating on the upper and lower walls. the list could go on & on but.. some are getting the message & getting involved. No one needs to stand up to these ppl , a simple phone call in the right ear will get results. Help us to help you, the anglers that want to see it better. We know the issues, if we know when its happening it can be dealt with.
Help us to keep the marina as one of the better South coast venues and keep us informed.
thank you
Anyway , enough of my ramble, until the next time …. over n out
F