two very different days with decent catches of mullet mid east on the bottom , a superb cuttle on the west, defo the biggest ive seen on the walls & pictured here. A few fat mackerel , plaice even a bream got winkled out on the west which to my knowledge was the 1st this year confirmed./

Fri was an absolute battle with many long faces in the sun and proved to be a day of hard knocks and a rush of pouting over the high followed by the spider crab invasion… a nice day out in the sunshine for me , not so good for some as things proved tough going
F

Not a massive amount to say due to erratic weather patterns and walls closing or being open in churned up waters. Mucky water out there today with a fair amount of weed rolling through until near the high tide when it cleared somewhat.. by 2pm it wasnt pleasant in the choppy conditions & wall was closed at 4pm today…
Tomorrow both will open, the east at 6am , the west will be a bit delayed so that proper checks can be done prior to opening about 8am.
F 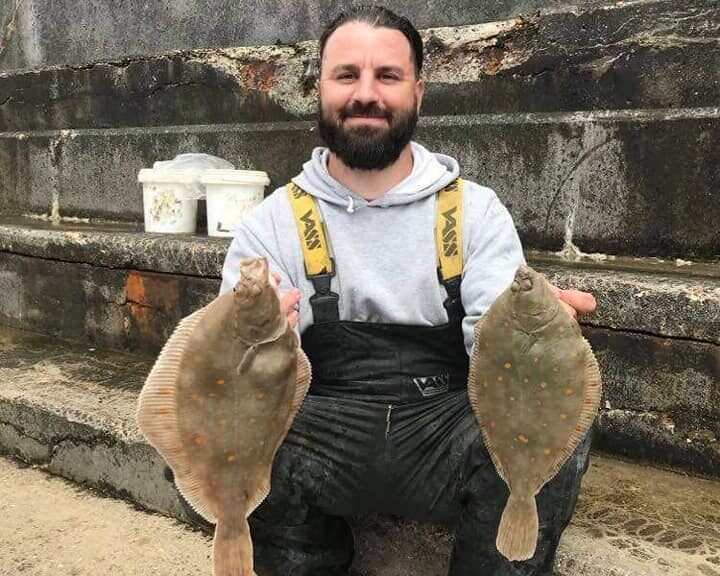 Well the weekend was somewhat grubby with showers and a strong SWest breeze hampering things on the west but.. inspite of that mackerel were had on the west over the weekend with the water doing its best to stay cloudy rather than muddy & showing good signs for this coming week. The 1st decent wrasse were recorded high on the east but fishing was as said by anglers up there … challenging to say the least while pulling out a +11lb conger !.. Some decent plaice amongst the smaller ones, hound pups , bass & schoolies over on the east but many simply found it was a day for eels & flatties … pictured is Glenn with a nice brace of plaice.
F 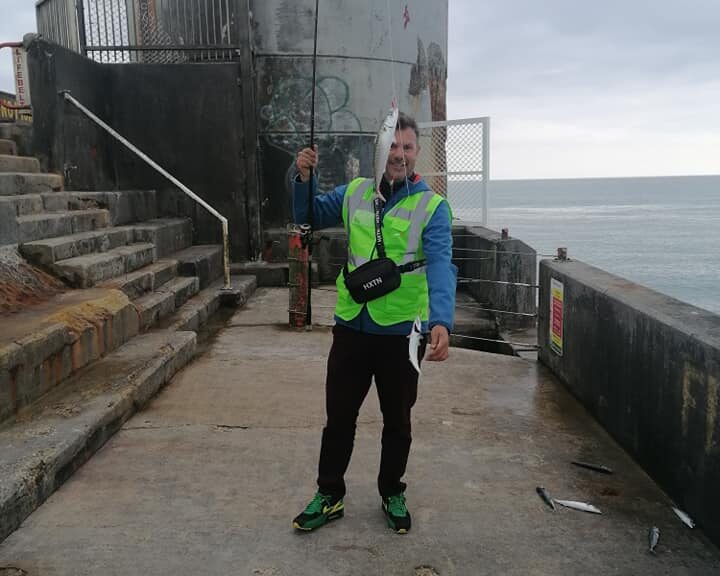 So things still a bit bumpy and water grubby so the usual of a few flatties an increase of eels & some bass both sides aaaannnnnnnnddddd some good numbers of mackerel on the west yesterday.
whats the news ya say ?
Well there is an update on night fishing so go check the night fishing page out & see what it says.

Not posted here for a few days as things have been slow angler wise and occasional closures due to high winds. Regarding catch reports things have also been a bit thin on the ground although there have been a few decent bass coming up on the east wall surprisingly not from the usual spots but hey thats for anglers to work out … a week mainly of reports of plaice, eels, hound pups and occasional bass & mackerel flurries on the west. Likely low on reports simply due to the quiet week on the wall for anglers. Water this week quite stired up & murky mostly due to strong breezes & winds but also showing may rot in the water making things a little more challenging .

Pictures are a four bass caught yesterday by two anglers who had invaded Sussex from far flun ESSIX :)… things looking a bit choppy over the weekend that may cause issues on the west and Sun possibly on the east so please check your weather apps or the home page for latest info on openings.
F

As says, both closed on tues,
delayed opening WED for wall checks then the west should re-open on WED at 7am, EAST after checks about 7.30am, normal Thurs

Well tough old going by all accounts on both wall with a late flurry of some great pics posted to the facebook group and 2 pics used on the flatties gallery, on the east side tough going for most as i understand it & somewhat grim..
I spent the day tinkering on the west & a similar story unwraped, one or 2 fish during the day a couple of small plaice lower down.. 4ish a few mackerel got landed scattered along the wall, & wasnt really till 5ish that a small shoal flittered along the bend with a few decent mackerel taken by most .. all in all not what was expected & a tough old day.
A big heads up to kadir, if you read this .. was a pleasure to meet you again as always.
Matt 1st time ive seen you in over a year… damn man , what a change, impressive work you have put in, well chuffed to see the new you. 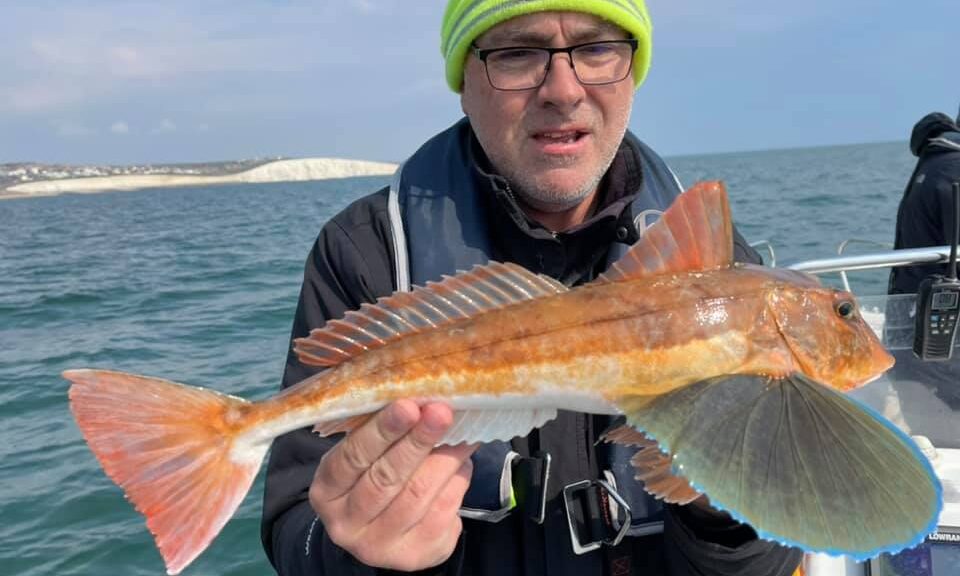 Good morning world, yesterdays report of early mackerel shoals turned into a great day for those looking to grab,bag n run so to speak, the mackies continued all day , some squid were had on both walls and the plaice ticked over, not so many plaice asnd i suspect fewer targeting them…
This morning we have visitors from the I.O.W., arn’t we honoured 🙂 mackies again on both walls & some nice plaice falling to the anglers, of which it seems are more plentiful today and less of the flying lead crews. Not heard of any squid at time of typing but that may change as the day goes on.
BAIT for the weekend sir ?
We have a limited supply of ragworm, this seems across the south coast at the moment with many shops in short supply. We highly advise booking as early as possible if u want to use ragworm this weekend. Our supply of black is good so no issues there.
Have a great bank holliday weekend folks and I may see some of you on the west Sat or enen Sunday 🙂 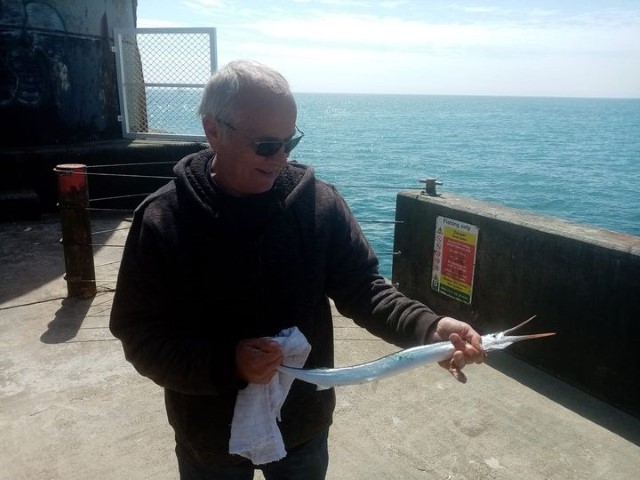 So woke up today to messages from the duty warden(phil) that there were mackerel shoals on both walls & hardly anyone fishing (irony after some fun on the FB group yesterday).. Things soon picked up & was sent plenty of pics to post on the facebook group (see soc media buttons for link/joining requires the question section completing) So we have the 1st shoals of the year on both walls with other catches of squid,garfish(yup early) shad and decent numbers of plaice. Sun mon were not that special with slow tick overs on both with some mackies on both walls here n there & reasonable amounts of flatties

Now signs of may rot drifting about but with the bigger tides there is plenty to catch still.
Seems that song is in the air …”here comes summer”,,….